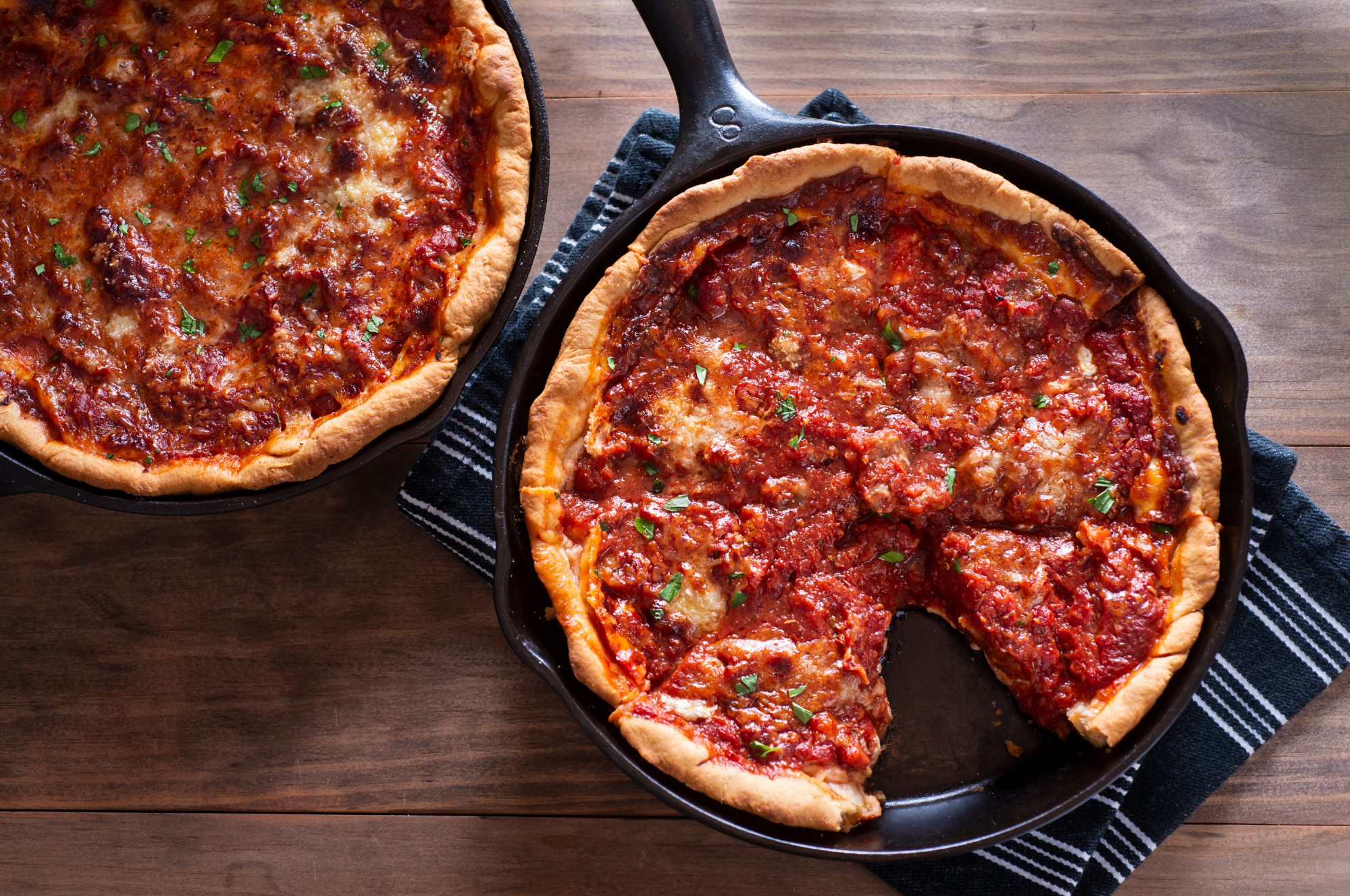 Deep-dish pizza is the most famous food to come from Chicago, and it has ardent supporters and fierce detractors. And even those who love it can’t agree on which place has the best pie. So how did this local creation come to be as popular as it is polarizing? Not surprisingly, the history is different depending on who’s telling it.

The one fact that’s undisputed is that it was introduced at what is now called Pizzeria Uno, at 29 E. Ohio St. According to what has become Chicago legend, Ike Sewell was a liquor salesman whose route included Riccardo’s Restaurant & Gallery, located at 437 N. Rush St. The owner, Ric Riccardo, was born Richard Novaretti in Italy and his place specialized in Northern Italian cuisine and featured works by his artist friends on the walls. Sewell had missed Mexican food like he enjoyed back in his native Texas, and partnered with Riccardo to open a Mexican restaurant.

However, when Riccardo tried Mexican food for the first time, he became violently ill. As a fallback, he brought up the idea of a pizzeria. Sewell wanted something heartier than the thin-crust slices found in Little Italy establishments like Pompei or Granato’s, and the men created a thick-crust pie in a pan that changed the way pizza was constructed, with the toppings now going between the cheese and tomato sauce. Called simply The Pizzeria, it opened on Dec. 3, 1943. To capitalize on the popularity of Riccardo’s other restaurant, the name was soon changed to Riccardo’s Pizzeria.

But Riccardo’s Pizzeria took a while to catch on. Fortunately, Sewell’s knack for promotion served him well; there are stories that samples would be handed to pedestrians and bar patrons in the hope that they would take to it. Eventually, the strategy paid off and Sewell, who became the sole owner after Riccardo’s 1954 death, opened up a second location a block away at 619 N. Wabash Ave., calling it Pizzeria Uno and rebranding Riccardo’s Pizzeria as Pizzeria Uno. In 1980, he started franchising Uno, bringing Chicago’s deep-dish pizza to people all over America and, eventually in several other countries.

At some point during Uno’s earliest years, Alphonso “Rudy” Malnati Sr. began working there as a bartender and was promoted to manager. His son, Lou, took the same path, although a Tribune article from 2009 says he moved from behind the bar at Uno to running Due upon its 1955 opening. According to the BBC, Lou eventually grew unhappy with his role, which caused him to leave Sewell and open Lou Malnati’s in 1971 in Lincolnwood. As of 2022, Lou Malnati’s has 78 locations throughout the Chicago area and Arizona.

In addition, Lou’s half-brother, Rudy Jr., started Pizano’s 20 years later. The company’s website says that Rudy Sr. was part of the team that started Uno and suggests—but stops short of saying—that deep-dish is his father’s invention. Rudy Jr. would also point to a newspaper article from the mid-1950s that fingered Rudy Sr. as the man behind Uno. Taken as a whole, the combination of Rudy Sr.’s involvement at Uno, the success of Lou Malnati’s, and the article could lead one to believe that deep-dish came from the Malnati family.

Those are all good stories, but…

Virtually every history of deep-dish credits Sewell as its driving force, both at The Pizzeria’s inception and its growth. Ric Riccardo comes across more like a silent partner (although the famously gregarious Riccardo could never truly be defined as “silent”). However, pizza expert Peter Regas spent 12 years researching the story of deep-dish, working with Tim Samuelson, Chicago’s first official cultural historian. In a 2021 online presentation to the Culinary Historians of Chicago, Regas disputed virtually every aspect of the long-accepted history, and he had documents to back it up.

He found a pair of interviews from the mid-to-late 1990s with Riccardo’s ex-wife Mae Juel “Jill” Allen, who said that Sewell “didn’t know beans about pizza” and that deep-dish was Riccardo’s idea. The Riccardos lived at the mansion at 29 E. Ohio St., where there had been a tavern called the Pelican Club. Not wanting to have another late-night joint with a jukebox keeping them awake, they decided to open a restaurant. But when getting liquor proved difficult due to World War II rationing, Riccardo brought in Sewell, with his wife named as the co-owner to avoid conflict-of-interest laws.

The official papers all-but confirm Jill’s claims. For starters, the application for The Pizzeria’s first liquor license name Riccardo as the sole owner with no partners. Regas also presented a Chicago Sun story about the restaurant two weeks after its opening that focuses on Riccardo and doesn’t mention Sewell. Regas then produced a partnership agreement between Riccardo and Florence Davis (she used her maiden name to avoid suspicion) dated Feb. 15, 1944 that gave her 50 percent of the business for an investment of $3,000. The agreement also gave a percentage of the profits to the manager and, most tellingly, declared that, upon the death of one of the partners, the other could buy out the estate of the deceased for that same price of $3,000.

A menu from the Pelican reveals that the bar served pizza. Therefore, Regas stated, Riccardo may have decided to open a pizzeria because there was already a pizza oven on site, although it’s unknown who came up with the idea to cook pizza in pans or whether the Pelican’s abandoned kitchen had them.

Also, none of the early articles about Uno or Due, nor its original menu, presented by Regas say anything about their product being a different take on pizza. The term “deep-dish” didn’t appear until 1971 in a Northwestern student newspaper, although it was commonly referred to around town as “pizza in a pan.”

Therefore, the key moment in the history of deep-dish pizza was Riccardo’s 1954 death. It not only gave sole ownership of Pizzeria Riccardo to Sewell, it allowed him to virtually write Riccardo out of the story and craft a different narrative around himself.

As for Rudy Malnati Sr.’s role in inventing deep-dish, Regas didn’t dispute that Malnati had been with Riccardo from the beginning, but he noted that there is no documentation of his employment prior to a June 1951 Tribune piece that named Malnati as the new manager. Liquor licenses in the restaurant’s first few years name Bartolomeo Fico and Gino Volpi Sr. as the managers.

And then there’s Alice Mae Redmond

The Sun article says that Riccardo learned how to make pizza by taking a three-week course, but that doesn’t necessarily mean Riccardo invented deep-dish. Regas uncovered some photos of Uno and Due taken between 1943 and 1957 that show that, while the pies are thicker than a traditional pizza, they’re nowhere near the same height as what we think of today as deep-dish, nor are the ingredients layered in the reverse order as a thin-crust.

It wasn’t until the early-to-mid-1960s that the pizza at Uno and Due took on the characteristics so familiar to Chicagoans. So who was responsible for that?

It’s possible that Alice Mae Redmond is the answer. A Black woman born in Mississippi in 1915, she moved to Chicago at an unknown date in the 1940s, found work as a cook at Uno and later moved to Due. Regas spoke with her daughter, Lucille Conwell, who said that Redmond changed the recipe for the dough because it didn’t stretch properly. To rectify this, Redmond incorporated her family’s recipe for Southern biscuits into the pizza dough by adding oil, cream of tartar, and sugar.  Regas thinks that this change could have been the turning point for Uno’s and Due’s pizza.

By 1960, Redmond was working at Due during the day and another pizzeria, Gino’s on Rush, at night. Upon hearing about Redmond’s moonlighting, Lou Malnati forced Redmond to choose between the two places. She chose Gino’s and in 1966, when Gino’s owners opened Gino’s East in a space across Michigan Ave. on Superior St., moved to the new location.

While it’s possible that Ike Sewell worked with his kitchen to devise a pizza around his palette, it most likely wasn’t until after Riccardo’s death. Sewell deserves all the credit for using his skills as a salesman to make Pizzeria Uno and Due a success, which resulted in the world knowing about deep-dish pizza. But the story he told, engaging as it may be, lacks credibility. The evidence suggests that Ric Riccardo and Alice May Redmond played far greater roles in its creation and development into the food loved by millions today.