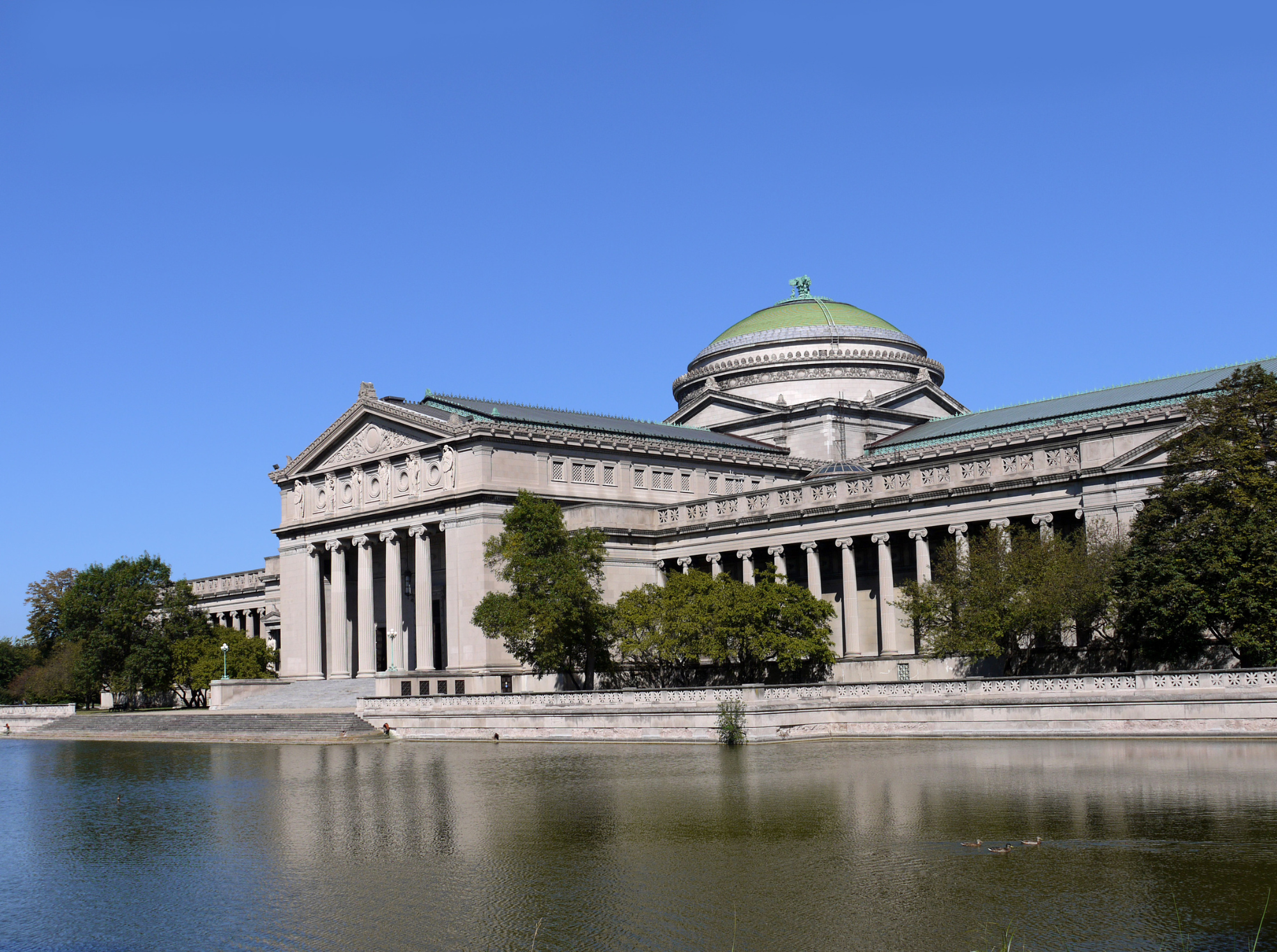 Located in Jackson Park in the Hyde Park neighborhood, the Museum of Science and Industry is farthest from downtown of all of Chicago’s major attractions. Designed by Charles B. Atwood of D. H. Burnham & Co. in the neoclassical Beaux Arts style, it was constructed for the 1893 World’s Columbian Exposition, where it served as the Palace of Fine Arts.

Daniel Burnham’s vision for the fair’s buildings was to have the outer walls made of staff—a mixture of plaster of Paris, hemp fiber, and glue—and painted white, which is how the fairgrounds earned the nickname “White City.” The idea was two-fold: The color would better show off the natural beauty of Lake Michigan and Frederick Law Olmsted’s perfectly sculpted parks; and the material meant that they could be constructed and torn down quickly and cheaply.

However, the Palace of Fine Arts had greater needs than the others. It had to be fireproof due to the value of the collection of art on display. A steel-and-brick substructure was made to meet these demands. As a result, the palace could be repurposed after the fair, making it one of two buildings constructed for the fair that is still in its original location. The other—the Art Institute of Chicago—was an assembly hall before transitioning to its current use immediately upon completion of the fair.

As the fair was in the planning stages, a Harvard professor named Frederic Ward Putnam suggested that artifacts from the fair be permanently on display. Marshall Field agreed to bankroll it, and the Field Columbian Museum opened on June 2nd, 1894.

But it didn’t take long for the Field Museum’s collection to outgrow its space. In his 1909 Plan of Chicago, Burnham proposed placing a new museum in the center of Grant Park. But Aaron Montgomery Ward sued on the grounds that it violated a state statute against buildings in the park along the lakefront. The Illinois Supreme Court ruled in Ward’s favor, and a new place just to the south of Grant Park was selected—with the land for the museum created by filling in Lake Michigan. The spot Burnham preferred for the Field Museum became the home of Buckingham Fountain.

The new Field Museum of Natural History opened on May 2nd, 1921, leaving the former Palace of Fine Arts empty. A solution of how to use it came from another of Chicago’s shopping magnates. Julius Rosenwald, the chairman of Sears, Roebuck and Co., had visited the Deutsches Museum with his son in 1911 while on vacation in Munich. Both were intrigued by the interactivity of the exhibitions and felt that Chicago needed something similar. In 1926, Rosenwald donated $3 million to renovate the original Field Museum for the new purpose.

But the building, which had remained vacant for five years, needed substantial work. The white staff comprising the museum’s exterior was removed and replaced with something more permanent, namely 28,000 pounds of Indiana limestone.

It was originally supposed to be called the Rosenwald Industrial Museum, but its benefactor balked at the idea of having it named after him. Instead, it took on the name of the Museum of Science and Industry. But Julius Rosenwald, whose overall contribution wound up being $7 million, never lived to see it completed. He died on Jan. 6th, 1932, 17 months before the museum had its invitation-only opening on June 19th, 1933.

Two weeks later, on July 1st, the museum opened to the public, even though only 10 percent of the building was in use. It coincided with Chicago’s second World’s Fair, the Century of Progress Exposition, which began at the end of May on the lakefront around the recently constructed Northerly Island. The Coal Mine, a trip down into a relocated mine—“Old Ben No. 17”— is a stand-out exhibit and remains in place to this day.

But as it expanded to fill out the 400,000-square-foot space during the Depression, the museum ran into financial difficulties. Help arrived in the form of Major Lenox R. Lohr, the former president of NBC and general manager of the Century of Progress, who succeeded Rufus Dawes as president of the Museum of Science and Industry. Lohr turned its fortunes around by shifting the focus from history to the present, in part through sponsorships with corporations, who would underwrite exhibits devoted to their industries. This included the Santa Fe Model Railroad (which morphed into The Great Train Story) and an exhibition on telecommunications from Bell Labs.

Bringing in corporations was just one aspect of Lohr’s 28-year tenure. In an effort to bring people to the museum in December, he created the annual Christmas Around the World. He also was responsible for such favorites as the Baby Chick Hatchery, a walk-through model of the human heart (now modernized as part of YOU! The Experience), Colleen Moore’s Fairy Castle, and, perhaps most famously, the captured German U-505 submarine.

Lohr’s efforts turned the museum’s fortunes around and the vision he shared with Rosenwald still guides it. It blends scientific phenomena—such as the cosmos, weather and flight—with our fascination for modern cultural institutions (Pixar, Marvel, and LEGO have all had exhibits) in an interactive and engaging environment. Today, the Museum of Science and Industry regularly ranks as one of the most popular museums in the United States, with nearly 1.4 million visitors in 2019, including 300,000 children as part of school groups. Its learning initiatives educate 1,000 teachers and more than 200,000 students throughout the Chicago area.