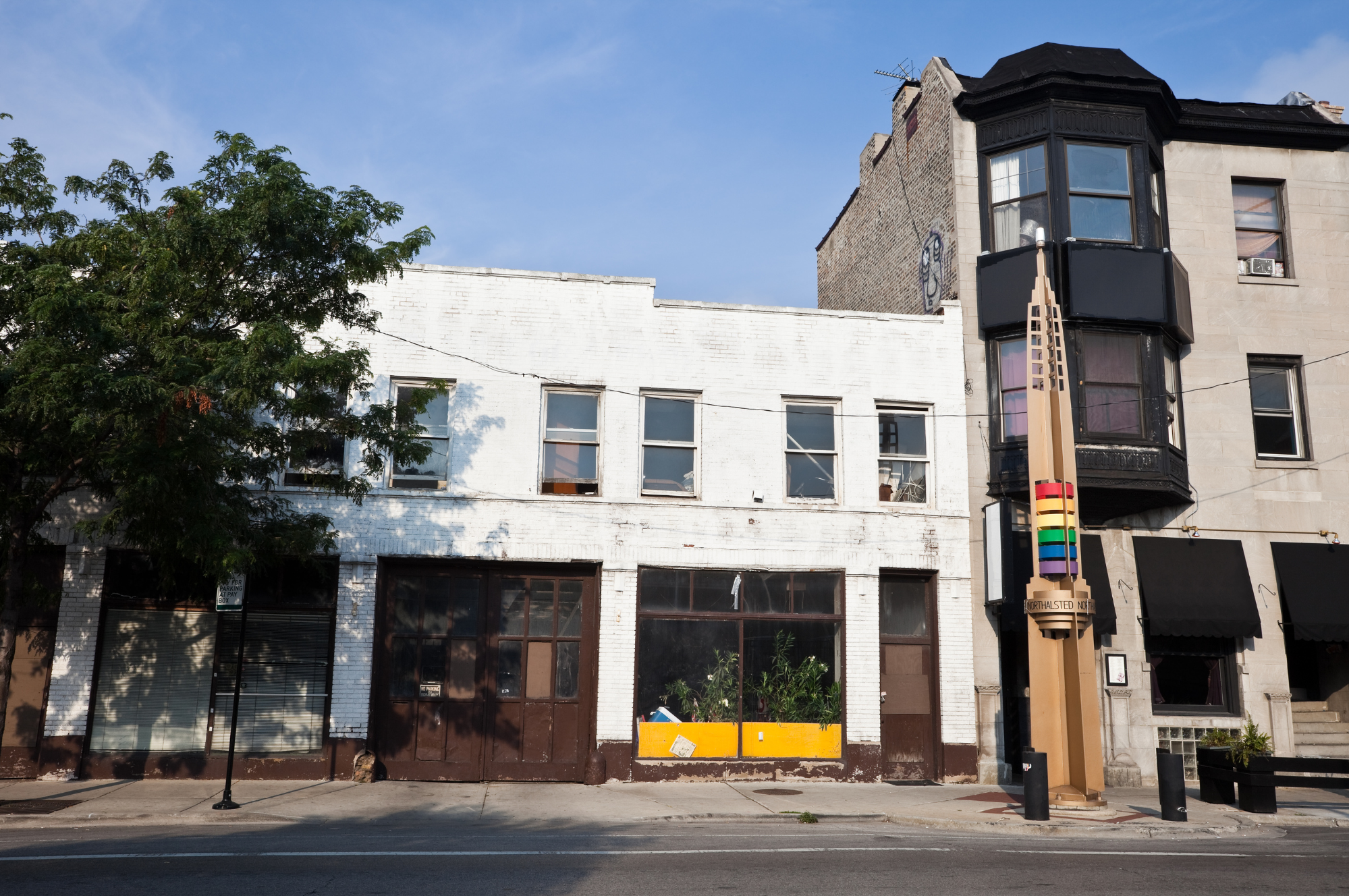 In recognition of LGBT History Month, we hope you enjoy this history of Northalsted. This Lakeview neighborhood, known until 2021 as Boystown, has for decades been synonymous with Chicago’s LGBTQ community.

eAtlas has a walking tour of Northalsted called Bits of Boystown created by Ronnie Frey. You can purchase it here.

In 1997, Mayor Richard M. Daley declared that Boystown, a ¾ mile stretch of N. Halsted St. between Belmont Ave. and Grace St., was to be officially recognized for its important role in promoting gay culture. It was the first time an American city had bestowed such a designation on a neighborhood, elevating Boystown to the level of long-established ethnic neighborhoods like Little Italy, Chinatown or Greektown.

Prior to Boystown/Northalsted’s emergence, Chicago didn’t have a part of town that the LGBTQ community could call its own. There were merely pockets of sympathetic enclaves. The Levee, the infamous red-light district comprising S. Dearborn Ave. between 18th and 22nd Sts., became one such place in the early 1900s. But in 1911, the city shut the Levee down after a Vice Commission report called The Social Evil in Chicago.  The city’s gays and lesbians needed a new place where they could be accepted.

Many gravitated towards Towertown, a loosely defined Near North neighborhood situated in the vicinity of Chicago’s iconic Water Tower that had gained a reputation as a bohemian art colony. The Dill Pickle Club on Tooker Alley off of N. Dearborn St. and near Washington Square Park (also known as Bughouse Square) became known as a place where topics related to sexual orientation could be freely discussed. But by the mid-1920s, a few years after the construction of the Michigan Ave. Bridge, Towertown was beginning to transform into the luxury shopping district it is today. This priced the artists out of the neighborhood.

It was around this time that Henry Gerber, a German immigrant who had been institutionalized in 1917 because he was gay, founded the Society for Human Rights. It’s the first organization in the United States advocating for the civil rights of the LGBTQ community. It was only a few months before Gerber and other members were arrested in 1925 on trumped-up obscenity charges, which were subsequently dropped. He moved to New York soon afterwards, but his legacy in Chicago is remembered, with the Gerber/Hart Library and Archives in Rogers Park named in part for him. In 2015, his home at 1710 N. Crilly Court in Old Town, where the Society for Human Rights was born, was declared a National Historic Landmark.

Following the dissolution of Towertown and the repeal of Prohibition, the queer community spread throughout the city.  The Loop was popular due to its assortment of hotels, theaters and bars. A prominent gay bar, Waldman’s, located at 164 N. Michigan Ave., catered to gays and lesbians, along with various Near North spots, including Oak Street Beach.

On the South Side, queerness thrived in Bronzeville during the Great Migration. Clubs with names like the Pleasure Inn, the Plantation Café and the Cabin Inn accepted all comers—straight and gay, black and white, with integration upsetting the police more than the presence of homosexuals. In addition to performances by numerous Black queer jazz and blues musicians, Bronzeville’s clubs featured female impersonators.  Beginning in the 1930’s, the precursor to today’s drag shows and “Drag Balls” regularly took place on Halloween and New Year’s Eve. The significance of those holidays wasn’t lost; events such as these could be held as conventional masquerade balls on nights when it wouldn’t be seen as violating Chicago’s laws against cross-dressing.

The integration of Bronzville’s queer clubs came to an end after World War II. A cultural shift in the 1950s, fueled by articles in Chicago’s Ebony magazine, drove local queer Blacks from Bronzeville to South Shore and Hyde Park.  It’s in this area where the Jeffery Pub—the oldest continually operated gay bar in Chicago—opened in 1965. Whites fled to newer, segregated clubs on the North Side, mostly around the intersection of W. Diversey Pkwy., N. Clark St. and N. Broadway. Even after Illinois became the first state in the country to repeal its anti-sodomy law in 1961, police harassment was common.

In 1969, the gay community determined it had had enough. On June 28th, during a raid at the Stonewall Inn, a gay bar in New York’s Greenwich Village, customers fought back, resisting arrest and starting a riot. The uprising continued over the next few days, and the national attention given to Stonewall gave birth to the modern Gay Liberation Movement. A year later, gay communities in New York, Chicago, Los Angeles and San Francisco celebrated the anniversary with the first-ever Pride Parades.

Chicago’s inaugural parade started in Washington Square Park and made its way down to Daley Plaza, where an estimated 150 people circled the Picasso statue and shouted, “Gay power to gay people.”

Over the next few years, the community and the parade continued to move north within Lakeview, settling in a neighborhood known as “New Town” that had recently become a hot spot for young, single people and high-end shopping. A community center called Gay Horizons opened in New Town in 1973, giving gays and lesbians a safe space to meet, network and get information about social, professional and medical resources. In 2007, the move to a new facility prompted a name change to Center on Halsted.

Nightlife soon followed, with bars and bathhouses opening in the mid-1970s. But the ongoing concerns about harassment, both from police and homophobes, meant that many establishments didn’t have street-facing windows or signage.

However, the population growth along the Northalsted corridor, coupled with the fact that real estate in New Town was relatively inexpensive, made it possible for residents and business owners to buy property and plant roots in the neighborhood. That gave Chicago’s LGBTQ community something they’d never had: stability and economic and political clout. In 1980, the Northalsted Merchants Association (now the Northalsted Business Alliance) was formed.  A year later, Jane Byrne became the first Chicago mayor to issue a proclamation honoring the Gay Pride Parade. Byrne also ended discrimination on the basis of sexual orientation in city hiring and put an end to the raids in gay bars.

But the LGBTQ community was about to face a challenge that threatened its very existence: the AIDS epidemic. It has decimated gay populations everywhere; and, as of 2010, more than 14,500 Chicagoans have died from AIDS. Facing indifference or hostility from mainstream media in trying to broadcast crucial information and tell the stories of the community, Windy City Times was launched as a newspaper in 1985. A second paper, Outlines, arrived two years later.

At some point in the late 1980s, one of Outlines’ writers, Rex Wockner, began penning a column named after a frequently used nickname for the Northalsted corridor: Boys Town. Over time, the name, combined into one word, became synonymous with the neighborhood, and Mayor Daley’s 1997 action codified it. While Boystown became Chicago’s greatest concentration of gay men, much of Chicago’s lesbian population gravitated a few miles up N. Clark St., to Andersonville starting in the early 1990s.

Daley did more than simply give the neighborhood an official name. Although he was criticized early in his tenure as mayor for a slow response to the AIDS crisis, he soon passed ordinances against hate crimes due to sexual orientation, increased funding for those diagnosed with AIDS and allowed for same-sex partners of city employees to receive benefits.

The neighborhood continued to be known as Boystown until 2020, when an online petition circulated claiming that the moniker inherently excluded non-males. The petitioner also cited instances of local businesses discriminating against women, transgender individuals and people of color. In response, the Alliance conducted a survey of residents and concluded that the neighborhood would hereinafter be known as Northalsted.

Regardless of what it’s called, Northalsted has solidified its place as one of the most vibrant LGBTQ neighborhoods in America, one that continues to honor its history as it moves forward.

eAtlas has a walking tour of Northalsted called Bits of Boystown created by Ronnie Frey. You can purchase it here.