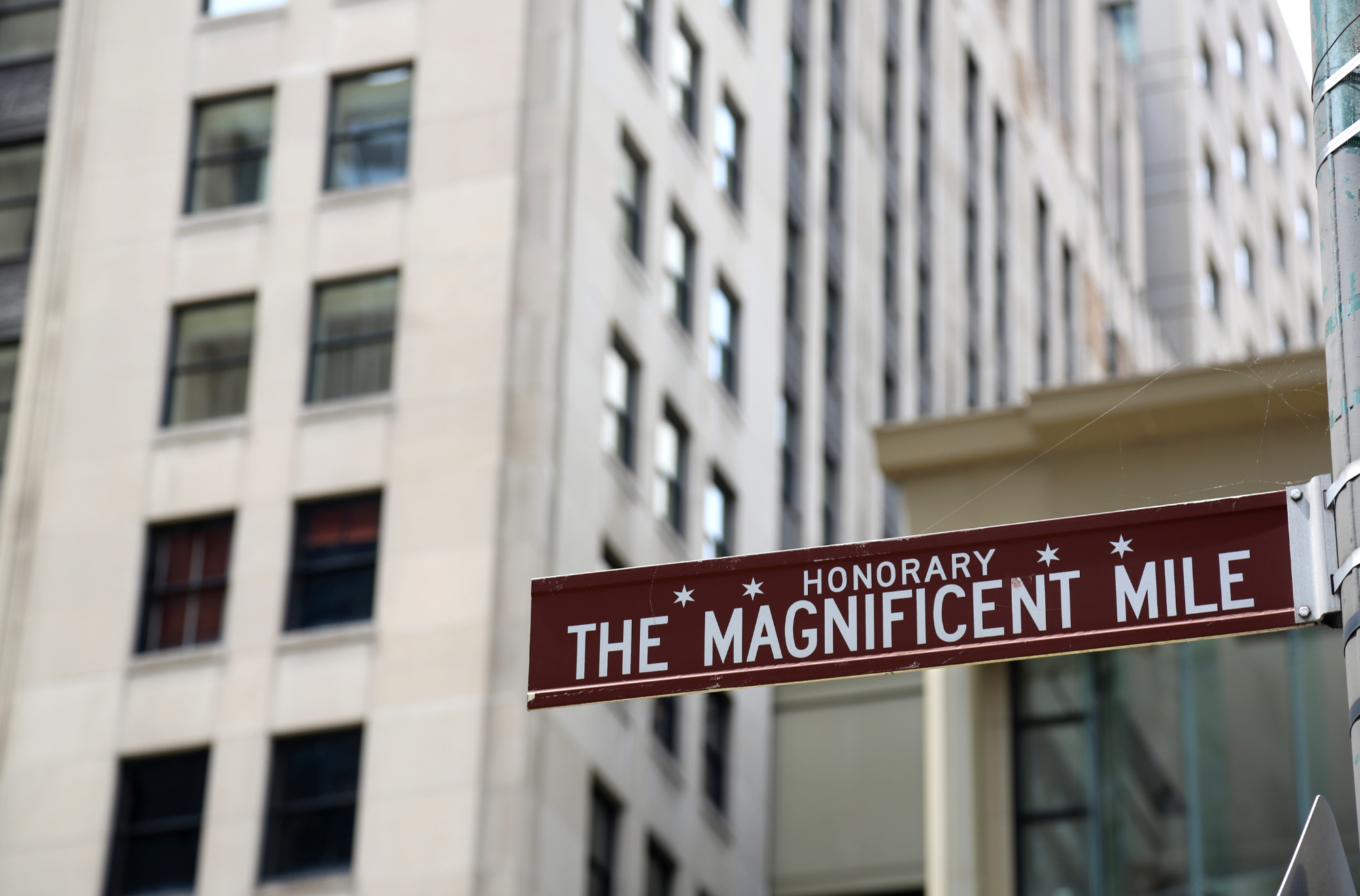 Iconic Chicago: The Magnificent Mile – from casualty to achievement

Our monthly series Iconic Chicago looks at some of the most famous locations in our city. We’ll explore the history of these places and why they have earned the love of residents and tourists alike. The latest installment of Iconic Chicago explores the history of the Magnificent Mile. Next time you’re downtown, take our self-guided walking tour of its highlights.

Similar to New York’s 5th Ave. or Rodeo Drive in Los Angeles, the Magnificent Mile—the area of Michigan Ave. from the Chicago River to Lake Michigan—has become synonymous with high-end shopping. As with so much of modern Chicago, its transformation from prairie to thriving downtown thoroughfare came with its share of stops and starts along the way.

The Magnificent Mile begins where Chicago was first settled by non-Native people. Jean Baptiste Pointe DuSable, born in what is now Haiti to a French father and enslaved mother, arrived in the late 1770s and built a home and trading post along the north bank of the river near where it meets the lake. DuSable and his family stayed until 1800, and the location of his estate is now the site of the Equitable Building and an Apple Store. But DuSable’s role as the “Founder of Chicago” is recognized by a bust of him just above the bridge, which was renamed for him in 2010.

From Pine Street to Michigan Avenue

The original 1830 plat of Chicago didn’t extend further east than State St. on either side of the river. But by the time of Chicago’s 1833 incorporation as a town, Pine St., running from the north bank to Chicago Ave., had been laid out and was extended to the lake by 1863. Soon after, the need to improve the quality of Chicago’s drinking water led to the building of William Boyington’s famous Water Tower and the pumping station, with one block of Pine St. moved 80 feet to the west to keep the two structures together.

In the mid-1870s, Lake Shore Drive was extended south from Lincoln Park to Oak St. Within 20 years, Pine St. between Ohio St. and Oak St. was renamed as Lincoln Park Blvd. By this point, there had already been talk about building a bridge on Pine St. to ease the congestion on the bridge at Rush St. The City Council had even approved it in 1905.

While the idea of connecting Pine St. to Michigan Ave. below the river didn’t originate with Daniel Burnham and Edward H. Bennett’s 1909 Plan of Chicago­—as has often been stated—it turned out to be the catalyst. Their incorporation of the idea was a central component of turning the city into “Paris on the Prairie,” with Michigan Ave. as Chicago’s equivalent of the Champs-Elysees, lined with stately eight-story buildings and plazas where pedestrians could congregate. Burnham’s concept was approved in 1913, and Pine St. was renamed Michigan Ave. in 1917, one year before construction on the bridge began.

The entire project—acquiring the land, widening Pine and Michigan, and building the bridge—was completed in 1920 at a cost of $15 million (more than $222 million in 2022 dollars). The bridge singlehandedly changed the neighborhood, with future landmarks like the Wrigley Building, Tribune Tower, Drake Hotel, Palmolive Building, Medinah Athletic Club (now the InterContinental Hotel), McGraw-Hill Building and the Allerton Hotel springing up over the next decade. In 1926, the block that had been rerouted for the water tower was reintroduced into Michigan Ave.

As John Stamper’s Chicago’s North Michigan Avenue: Planning and Development, 1900-1930 notes, the new Michigan Ave. was, from the start, intended as an upper-class alternative to State St. The North Central Business District Association, formed in 1912, worked with the city to ensure that all buildings along the street had high-end retail shops. They also banned trucks and streetcars in favor of the private automobile, which were then exclusively owned by the wealthy. But then came the Great Depression and World War II, and the fortunes of Michigan Ave. were reversed for the next decade and a half.

By the end of World War II the speed of Chicago’s growth in the 1920s left the city with too many vacancies to justify new commercial real estate construction. But Arthur Rubloff, a successful developer with a showman’s knack for self-promotion, felt the opposite. Working with the architecture firm of Holabird & Root, his vision to revitalize Michigan Ave. called for a pedestrian-friendly environment, with low-to-mid-rise buildings containing street-level shops and offices above, with high-rise offices and apartments behind them on Rush and St. Clair Sts. In addition to the buildings, Michigan Ave. would be dotted with a park, skating rink, and promenades.

In short, Rubloff mashed-up Burnham’s “Make no little plans” dictum with the line that would become famous more than 40 years later in Field of Dreams: “If you build it, they will come.” He inherently understood that the rejuvenated district needed something special to capture the public’s imagination, so Rubloff, using his prowess as a hype man, decided to call it “The Magnificent Mile.”

It mattered not that the 13 blocks of Michigan Ave. between the river and Oak St. is only approximately .75 miles.

But making that dream a reality required more capital than Rubloff had, so he recruited New York developer William Zeckendorf, and the two spent $35 million acquiring all the available properties on Michigan Ave. Rubloff informed the public of his plan in April 1947, saying that it would cost $200 million to redevelop the street in a combination of renovations and new construction, but bring in $30 million annually.

Rubloff gained support from local business leaders, including the NCBDA, which was renamed Greater North Michigan Avenue Association (now the Magnificent Mile Association). Although the plazas and skating rink amenities never materialized, and high-rises were preferred to mid-sized buildings due to a higher return on investment, Rubloff’s vision ushered in a building boom on Michigan in the 1950s and ‘60s, culminating in the 1969 completion of the John Hancock Center at 875 N. Michigan Ave, a 1,128-foot combination of commercial and residential space that was the city’s tallest building upon its 1969 completion. Other skyscrapers, such as Water Tower Place and 900 N. Michigan Ave and One Magnificent Mile, followed over the next two decades.

Through sheer force of will and almost singlehandedly, Rubloff transformed N. Michigan Ave. from a casualty of the Great Depression to the street that virtually defines Chicago’s greatness. A magnificent achievement, indeed.