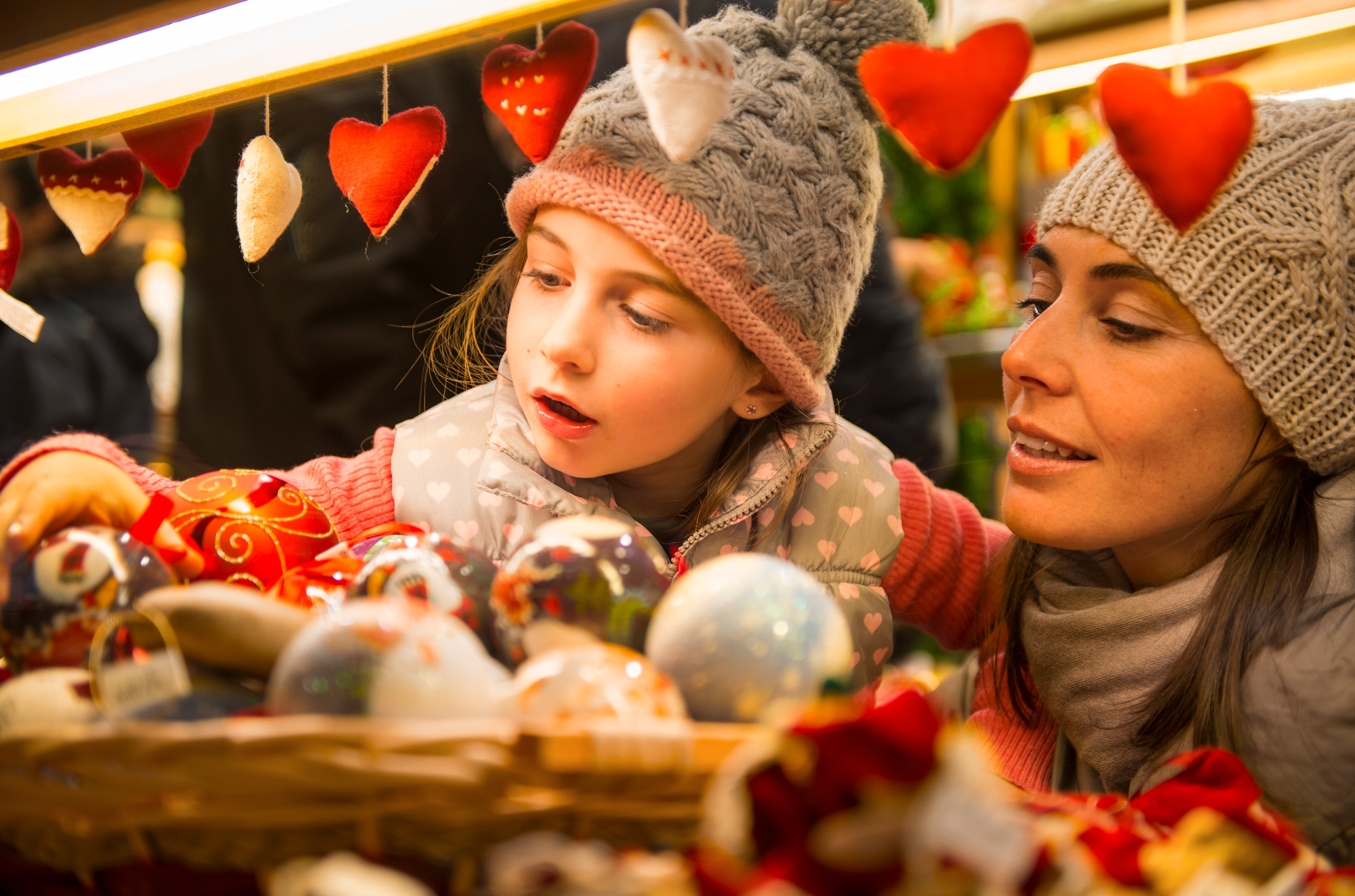 We’ve found family-friendly activities throughout the Chicago area that are specific to this time of year. Take a look below for examples of seasonal pop-up markets, outdoor skating rinks, cultural events, and holiday lights displays.

Chicago might not be known for its mild winters, but nobody can say that it doesn’t rise to the occasion at Christmastime. The combination of colorful lights and decorations and holiday spirit (and maybe even a bit of snow) elevates the mood of Chicagoans and offers a few weeks of beauty and joy before the deep freezes of January and February send us into hibernation until St. Patrick’s Day.

Nothing ushers in Christmas in Chicago like the opening of the Christkindlmarket. The replica of a traditional German Christmas market has been held in Daley Plaza since 1997, and has branched out in recent years to Wrigley Field and Aurora. Each offers wintry gifts from local and international vendors; German favorites like bratwursts, pretzels, and potato pancakes; and more. And no trip to the Christkindlmarket is complete without some hot cocoa or gluhwein served in the annual collectible souvenir mug.

Other pop-up markets, offering a variety of items from Chicago-based small businesses and artisans, will be open on select days and weekends throughout the area. Within the city, you can find them in North Center, Back of the Yards, Edgewater, State Street, Wicker Park, Woodlawn, and Garfield Park. Other holiday pop-up markets are in Wheaton, New Lenox, and Harvey.

If you’d prefer to shop local from the comforts of home, check out Here Here Market, which curates foods from some of Chicago’s top culinary talent. Items can be purchased individually or in themed sets.

Both of the Chicago area’s major zoos attract thousands of visitors in December. The Lincoln Park Zoo has added a Grand Light Tunnel and five themed Neighborhoods to ZooLights, which is now in its 28th year. The Brookfield Zoo’s Holiday Magic festival has more than 2 million lights and 27 gnomes scattered throughout the grounds for children to find.

Navy Pier’s Festival Hall is the home of the annual Light Up The Lake, which features more than 600,000 lights in several interactive displays, including a Winter Wonderfest Forest, Light Memory Game, and a holiday train to Santa’s House.

Elsewhere, the Chicago Botanic Garden’s Lightscape returns with its famous Winter Cathedral and a new take on its fire Garden. Illumination allows visitors to the Morton Arboretum to see its vast array of trees in a unique way, including a laser show in the Gerard T. Donnelly Grand Garden. Rosemont’s Sparkle Light Festival at Impact Field has added Rudolph Kids Zone and a Deck The Walls maze to its five themed villages. Kohlights at the Kohl Children’s Museum in Glenview is the only light display in the city created specifically for children.

For those who want to enjoy the dazzling beauty of the displays without having to go outdoors, there are several drive-thru shows: Santa’s Rock N Lights in Grayslake, and the Shine Lightshow, which can be experienced in both Northbrook and Schaumburg.

The Chicago area is loaded with outdoor ice-skating rinks. The most famous is at Millennium Park, where skating below The Bean provides an idyllic winter setting. Only a few blocks away is the skating ribbon at Maggie Daley Park, a winding, quarter-mile path that can hold as many as 700 skaters. The Peninsula Hotel’s Sky Rink is four stories above the Magnificent Mile, and all proceeds from skate rentals benefit local children’s charities.

Away from downtown, Winterland at Gallagher Way has placed its skating rink inside Wrigley Field, and has added a host of other attractions, including ice tubing, Santa’s Workshop, and a train that goes around the base path. Five other parks on the North, South, and West Sides also have outdoor rinks.

In the south suburbs, the Brookfield Zoo has a rink as part of Holiday Magic, and you can find more outdoor rinks in New Lenox, Cicero, and Orland Park. Kidlist has a comprehensive list of rinks in the western suburbs, including locations in Glen Ellyn, River Forest, and Bloomingdale. A similar guide to the north and northwest can be found at Chicago Kiddie World. However, it has not been updated since 2017, so be sure to visit the parks’ websites for full information.

Several theatre companies have brought back their traditional holiday productions. Lookingglass has its interpretation of Hans Christian Andersen’s The Steadfast Tin Soldier, and the Goodman Theatre’s adaptation of Charles Dickens’ A Christmas Carol returns for its 45th year (and 15th with Larry Yando as Scrooge). For young children, the Beatrix Potter Holiday Tea Party is an interactive trunk and puppet show based on four Potter stories at the Chicago Children’s Theatre, and the Chicago Kids Company has their 23rd installment of Mrs. Claus: A Holiday Musical at the Beverly Arts Center and the Stahl Family Theatre in Portage Park.

Numerous dance companies are putting on Tchaikovsky’s Christmas classic, The Nutcracker, including the Joffrey Ballet, Schaumburg Dance Ensemble, School of Ballet 5:8, and Ruth Page Civic Ballet. A modern take, The Immersive Nutcracker: A Winter Miracle, is on display at the Lighthouse Artspace in Old Town.

The Chicago Symphony Orchestra’s Merry, Merry Chicago brings together beloved carols and other Christmas favorites from Dec. 16-23. Lastly, movie buffs can attend a double feature of It’s A Wonderful Life and White Christmas at Lakeview’s Music Box Theatre, with Santa Claus leading the audience in a Christmas carols between films.

Remember to visit the websites for the most up-to-date hours of operation and ticket information, where necessary. And if you’re going to take public transportation, check to see if you can get there via the CTA’s much-loved holiday train and bus to make it even more festive!

The Adventure starts when you say it does.

All eATLAS Adventures are designed and built by experienced eATLAS Whoa!Guides. They're always on. Always entertaining. And always ready to go.

Check out our Adventures!