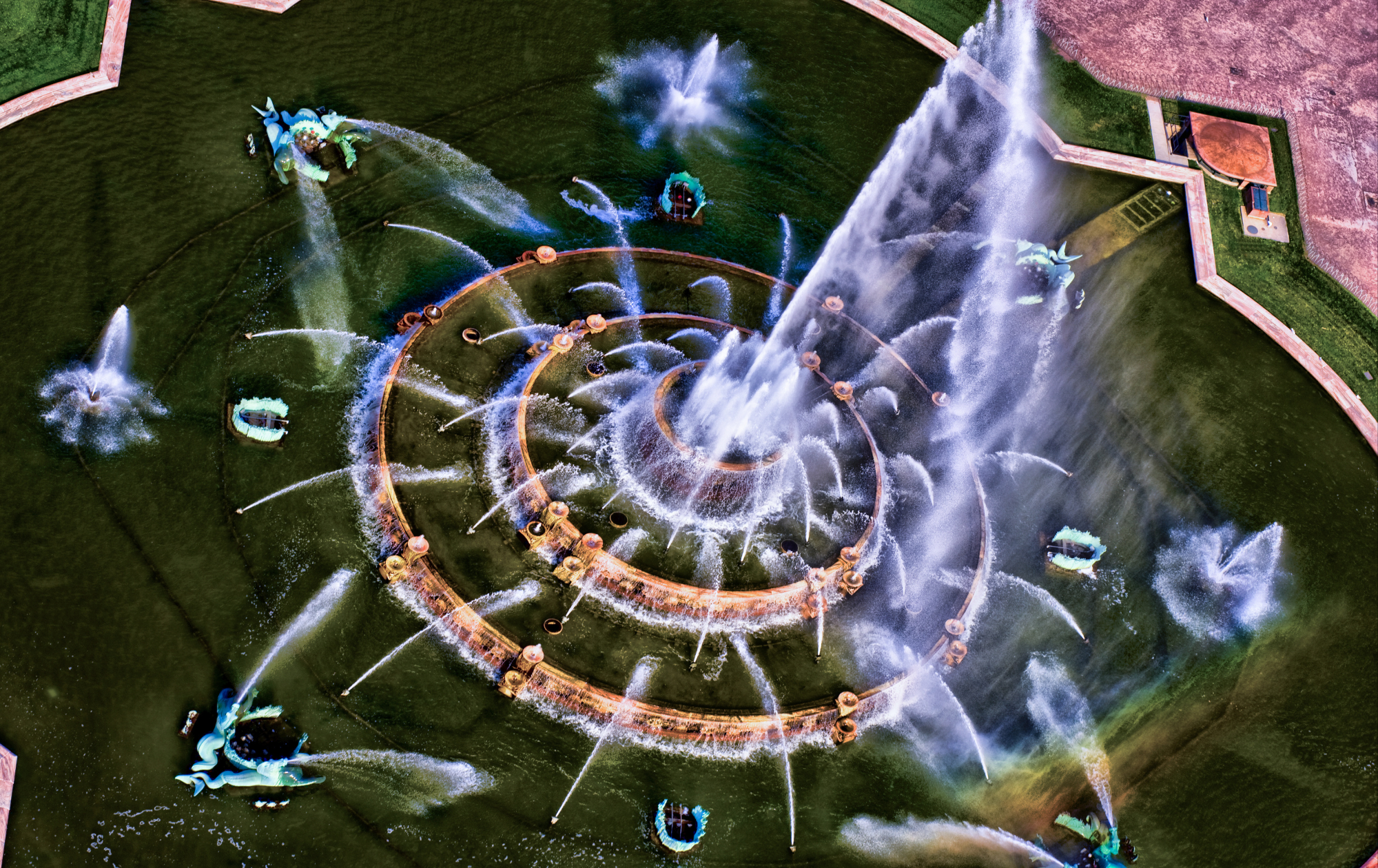 Iconic Chicago: Buckingham Fountain – The Lyric of the Lake

Although the marquee of the Chicago Theatre and the Bean are arguably more famous symbols of the city, perhaps nothing represents the majesty of Chicago better than the Buckingham Fountain, located in the center of Grant Park. In recognition of the 95th anniversary of its dedication on Aug. 26, 1927, let’s look at its history.

The fountain was donated by Kate Sturges Buckingham, whose family had made its fortune building and operating grain elevators in New York, Pennsylvania, and Ohio before moving to Chicago from Zanesville, Ohio when Kate was very young. Living in the Prairie District, the Buckinghams, like many prominent families, amassed a sizeable art collection. Kate’s brother Clarence, a successful businessman, was a longtime director of the Art Institute of Chicago, and often loaned pieces from his Japanese woodblock prints collection to the museum.

Their father, Ebenezer, died in 1912 and his children—Clarence, Kate, and Lucy—inherited his $4 million estate. Clarence died unexpectedly a year later at the age of 58 and Lucy, who was in poor health for much of her life, passed away in 1920. Kate donated both of their collections to the Art Institute. She also gave the South Park Commission $385,000 to build a fountain in Clarence’s memory–$250,000 for the construction and the remainder for future maintenance.

Edward H. Bennett, who co-authored the Plan of Chicago in 1909 with Daniel Burnham and was the lead architect of Grant Park at the time, designed the fountain in carved granite and pink Georgia marble. Bennett drew inspiration from the Latona Fountain at Versailles, but made it twice as large to reflect the size of Lake Michigan. Continuing the motif, French artist Marcel Loyau created the bronze sculptures, with the four Art Deco sea horses intended to symbolize the four states that border the lake. Loyau was awarded the Prix National at the 1927 Paris Salon for his work on the fountain. Kate also contributed, working with the planning team on a lighting scheme.

Ironically, Bennett wouldn’t have been able to put the fountain in its location had Burnham been allowed to complete his vision for Grant Park as laid out in their Plan. Burnham wanted the Field Museum to be the centerpiece of the park, but Aaron Montgomery Ward successfully sued the city on four separate occasions to keep buildings out of the park.

The fountain took two years to complete, during which time the cost ballooned to $700,000 (hardly the last time construction in Grant Park went over budget!). Buckingham Fountain was opened on May 26, 1927, with the dedication coming three months later, at a ceremony attended by 50,000 people with John Philip Sousa conducting his orchestra.

It remains one of the largest fountains in the world at 280 feet in diameter, with three concentric basins ranging from 24 to 103 feet. When in operation between May and mid-October, the fountain holds 1.5 million gallons of water, which are recirculated through three pumps and 133 jets. For 20 minutes every hour, a central jet sprays water 150 feet in the air. Beginning at dusk, the fountain’s beauty is augmented by 820 lights in various colors that, per Kate’s request, added the effect of “soft moonlight.” After being operated manually for 52 years, the fountain’s functions were fully automated by 1980, and have been upgraded with modern technology several times, most recently in 2013.

For 11 years, the Buckingham Fountain received a weekly national audience as part of the opening credits to the Fox sitcom Married… With Children.

Kate Buckingham died in 1937, but not before contributing another piece of public art to the city. In 1928, she put $1 million into a fund to construct a memorial to Alexander Hamilton in honor of his work as the country’s first Secretary of the Treasury. However, Buckingham didn’t live to see it come to fruition. Due to all sorts of red tape and lawsuits, the statue wasn’t completed until 1941 and it wasn’t until 1952 that it found a home in Lincoln Park at the intersection of Diversey Parkway, Cannon Dr., and Stockton Dr.

But the Buckingham Fountain stands as Kate’s, and her family’s, legacy. “[It] has captured the imagination of the town, enlarged its aesthetic sense, and done it spiritual good,” James O’Donnell Bennett wrote in the Chicago Tribune a week after the dedication. “The gift is more than a memorial to Clarence Buckingham. It is an expression of the lake by which it is fed and which it extols. As such, Chicago has comprehended it and as such loves it. It is the lyric of the lake. It will never grow old or commonplace. Sunlight and shadow, mounting and waning breeze will ever renew and ever vary its spectacle and its song. It will go on forever.”