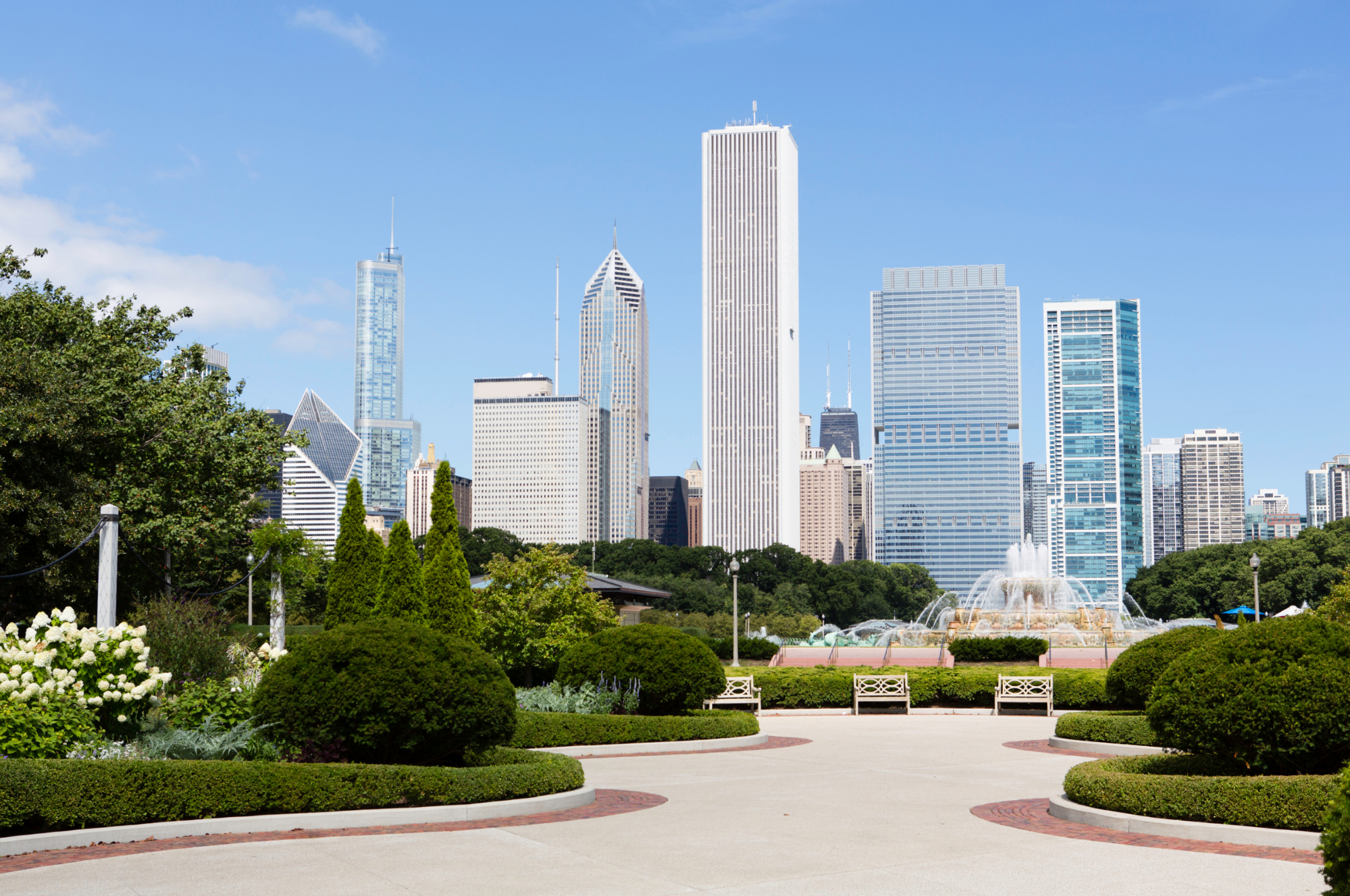 O Our monthly series looks at some of the most famous locations in our city. We’ll explore the history of these places and why they have earned the love of residents and tourists alike. The latest installment of Iconic Chicago explores Grant Park.

When showing off Chicago to visiting friends or family, one inevitably finds themselves in Grant Park. Named after former President Ulysses S. Grant, its combination of beauty, size and central location has made it known as “Chicago’s Front Yard.”

Spread out over nearly 313 acres in downtown Chicago adjacent to Lake Michigan, Grant Park is a continuous series of public areas. In addition to the area that is specifically designated as Grant Park, it also includes Millennium and Maggie Daley Parks, the Art Institute of Chicago, the Museum Campus and a segment of the Lakefront Trail.

History of a Grant Park

The idea of saving our lakefront for public use goes back to a year before Chicago was incorporated as a city. When used to sell parcels of land to raise money for the Illinois and Michigan Canal, a map from 1836 noted that the narrow strip of land east of Michigan Ave., was to be reserved for “Public Ground—A Common to Remain Forever Open, Clear and Free of Any Buildings or Other Obstruction, Whatever.” Three years later, the federal government, following the decommissioning of the second Fort Dearborn, gave the land to the city, which similarly designated the lakefront between Randolph and Madison Streets “forever to remain vacant of buildings.”

But the act of honoring that decree would often prove difficult over the years, starting with the arrival of the Illinois Central Railroad. Known as Lake Park at the time, the railroad built a trestle 300 feet offshore and a breakwall to protect the tracks in order to keep the lakefront “open, clear and free”.  As a bonus, the development spared the park and the nearby mansions from damage caused by bad weather.

The trestle and the park made national news on May 1, 1865, two weeks after the assassination of President Abraham Lincoln. As part of the funeral procession, the train carrying his body arrived in Chicago en route to his final resting place–his hometown of Springfield, IL. A makeshift depot, complete with an ornate funeral arch, was erected at the southern end of the park. An estimated 120,000 people lined the streets as his coffin made its way to the Cook County Court House, where mourners paid their final respects over the next day and a half.

By 1869, the tracks, which extended to the mouth of the Chicago River, would eventually be incorporated into Lake Park.  The lagoon created by the trestle was subsequently filled in with debris from the Great Chicago Fire.

Chicago had been without a proper place to hold conventions since the Wigwam burned down in 1869.  The Wigwam is where Abraham Lincoln was nominated for president during the 1860 Republican National Convention. To replace it, the city built the Interstate Industrial Exposition Building between Monroe and Jackson—the only stretch of the lakefront not deemed exclusively for public use—in 1872. Designed by W.W. Boyington, who also created Chicago’s iconic downtown water tower, the hall hosted art and trade exhibitions, the 1880 and 1884 Republican National Conventions, and the 1884 Democratic National Convention. It also served as an armory and as the home of the Chicago Symphony Orchestra.

The Interstate Industrial Exposition Building was only supposed to be temporary to show the world that the city had recovered from the fire. Still, it lasted for 20 years before being torn down to make way for the Art Institute.

Around this same time, baseball found its way into the lakefront.  In 1871, the Chicago White Stockings (who later became the Cubs) played at Union Base-Ball Grounds at Michigan Ave. and Randolph St.  This is the same location where Wrigley Square is in Millennium Park today. Back in 1871, the park was destroyed in the fire.  After taking a few years off and playing elsewhere, the team returned to the downtown location in 1878. Unfortunately, the team didn’t stay for very long.  Because the space between Michigan Ave and the railroad tracks was extremely narrow, the right and left field fences were less than 200 feet (the shortest in National League History).  Additionally, the government granted the land to the city, with the promise that the land would be used for non-commercial purposes.  After seven seasons, the White Stockings were forced to leave Lake Front Park.

The impact of Montgomery Ward

Other attempts to build in Lake Park would come up against a different foe. Aaron Montgomery Ward had built the headquarters for his mail order company on the corner of Michigan and Madison. Wanting to keep the park “forever open, clear and free,” he filed a lawsuit in 1890, citing state statutes passed in the 1860s that required the consent of lakefront property owners before anything could be built in the park. Seven years later, the Illinois Supreme Court ruled in his favor, and all structures in the park, except for the Art Institute and a pair of federal armories (which he approved), were removed.

The success of the World’s Columbian Exposition in 1893 sparked a population boom in the city, and with it, the need for more park space. Daniel Burnham, the lead architect for the fair, got involved. He suggested expanding the park, which in 1901 was renamed Grant Park, by filling in the lake with coal ashes and debris from basement excavations. He also hoped to put a library and a new home for the Field Museum in the park. However, each building proposal was met with a legal challenge from Ward.  Ward won three more lawsuits—the last in 1911—to prevent the construction of buildings in Grant Park. A bust of Ward was erected in 1993 to recognize Ward’s role in preserving the park. Since 2005, it has stood at the 11th St. entrance.

Though the Field Museum was eventually built nearby Burnham Park, Ward’s legal victory quashed the 1903 landscape design created by the Olmsted Brothers. A second plan, inspired by the gardens at Versailles, arrived four years later. Edward H. Bennett, who co-authored the 1909 Plan of Chicago with Burnham, took over the role of laying out the park after Burnham’s death in 1912. Similarly, Bennett took a French approach, using the more modern Beaux-Arts style to design a series of outdoor rooms, gardens and fountains, with bridges traversing the railroad tracks.

Buckingham Fountain, The Spearman and The Bowman

Two of Grant Park’s defining features arrived in the late 1920s. In 1927, philanthropist Kate Buckingham donated a fountain to honor her brother Clarence, who died in 1913. Known for its stunning beauty, nightly lighting display and a central jet that shoots water 150 feet into the air, Buckingham Fountain sits at Columbus and Ida B. Wells Drives, the same spot Burnham had chosen for the Field Museum.

One year later, statues of a pair of American Indians dubbed the Spearman and the Bowman were placed at the entrance plaza at Ida B. Wells Dr. Designed by Croatian sculptor Ivan Meštrović, the statues showed the figures on horseback and in battle but without their weapons in their hands. In 2021, the city reviewed the statues to determine if they depicted negative stereotypes of Native Americans; but, it was decided that they would remain in the park.

1931 saw an Art Deco band shell installed in Hutchinson Field in the park’s southeast corner to host free concerts during the Depression. James Petrillo, then the president of the Chicago musicians union, created the Grant Park Music Festival, a 10-week classical music program. The shell was named after Petrillo in 1975, and a new structure was built in Butler Field in 1978. The Grant Park Music Festival remains, although it’s now held in Millennium Park’s Pritzker Pavilion. These days, the Petrillo Music Shell is mostly used for city-run events like the Chicago Blues Festival, Chicago Jazz Festival and Taste of Chicago, as well as Lollapalooza.

Grant Park has continued to evolve with the times. The rerouting of northbound lanes on Lake Shore Drive west of Soldier Field in the mid-1990s led to the creation of the Museum Campus, consisting of the Field Museum, the Shedd Aquarium, Adler Planetarium and Northerly Island. The campus was transferred from Burnham Park to Grant Park, giving Burnham the last laugh on that battle more than 75 years after he and Ward passed away.

Growth and expansion in the 2000s

The 2000s saw even further growth with the arrival of Millennium Park in 2004, sitting between Randolph St. and the Art Institute. (Look for a future installment of Iconic Chicago featuring Millennium Park.). Since it was built, it has become one of the city’s most visited tourist destinations. Maggie Daley Park, named after Chicago’s former first lady, was opened in 2014.  It is home to playgrounds, an ice skating ribbon, tennis courts, a rock climbing wall, and a miniature golf course. Recent additions to Grant Park include a skate park and a dog run which, naturally, is called Grant Bark Park.

Grant Park has gained fame for events that have been held there. In 1959, Queen Elizabeth II and Prince Philip arrived in Chicago Harbor across Jean Baptiste Pointe du Sable Lake Shore Drive from Buckingham Fountain. The area was subsequently renamed Queen’s Landing.

During the 1968 Democratic National Convention, antiwar protesters were beaten by police and National Guardsmen live on national television.  The protest led to the arrest and trial of the Chicago 7.  But the park has also seen celebrations for championships won by the Chicago Bulls and the Cubs. And Barack Obama gave his victory speech from the park upon winning his first term as President of the United States in 2008.

Grant Park is more than simply a place for locals and visitors to enjoy the outdoors. It’s a living, breathing piece of Chicago history, one whose growth has mirrored that of the city it calls home.