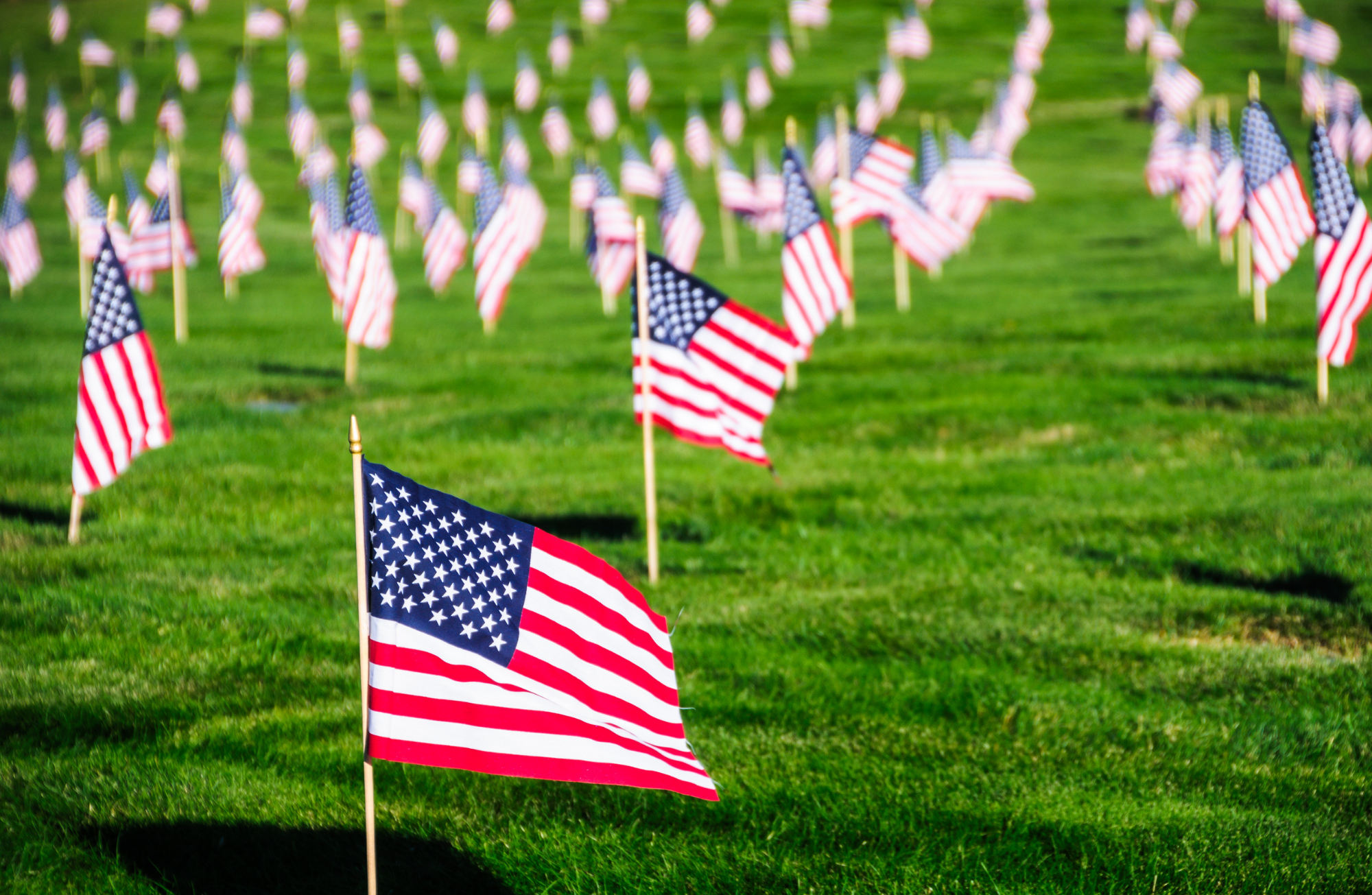 You can pay your respects in Memorial Day by visiting one of the many tributes to fallen soldiers throughout the Chicago area.

Following the Civil War, towns across America began honoring those who gave their lives in the conflict by placing flowers on the soldiers’ graves. One of the first, Waterloo, N.Y., turned it into an annual tradition. In 1868, General John A. Logan, who has a statue in his honor in Grant Park (link to Iconic Chicago post) and in the Logan Square neighborhood, proclaimed that May 30 be set aside to carry on the practice.

Called Decoration Day, the holiday was extended to commemorate fallen soldiers in all wars shortly after World War I. By that point, some states had already changed it to Memorial Day.  An act of Congress in 1967 made it official. A year later, the Uniform Monday Holiday Bill moved Memorial Day to the last Monday in May to give federal employees a three-day weekend.  The law took effect in 1971.

These days the timing of the holiday means that Memorial Day Weekend serves as the semi-official start to summer. Families will be firing up backyard grills for barbecues, scoping out the right spot to have a picnic or, looking for activities on the water since beaches open the same weekend. Others may be stopping by one of the street festivals taking place across the city. But if you’re looking to recognize the holiday in the spirit in which it was originally intended, you can pay your respects by attending a parade, participating in an event or visiting one of the many tributes to fallen soldiers throughout the Chicago area.

Parades and Ceremonies (all events start on May 30th  at 11:00AM unless specified)

Chicago’s official Memorial Day ceremonies will begin on Saturday, May 28th with a wreath-laying ceremony at the eternal flame at Daley Plaza. That will be followed by a parade down State St. from Lake St. to Van Buren St., which starts at noon. Later that night, the fireworks display that takes place at Navy Pier every Wednesday and Saturday night during the summer will commence.

WOOGMS ON THE NORTH SIDE

The Wellington-Oakdale Old Glory Marching Society (WOOGMS) is a 50-year-old organization dedicating to marching every Memorial Day and Labor Day.  WOOGMS will take to the streets of East Lakeview on Memorial Day starting at Wellington and Pine Grove Aves. Their goal is to get everybody—adults, children, and even pets—to take part in the parade as they head to the lakefront, where they’ll be met by the legendary Jesse White Tumblers.

To raise awareness of issues of mental health and suicide among those who have served, Chicago Veterans is holding their annual Ruck March on May 28. The 17-mile course, representing the 17 veterans who die by suicide every day, will start at Midway Plaisance Park and head up the Lakefront Trail to Olive Park, at which point it will head back in the opposite direction.

In Oak Lawn, the Johnson-Phelps VFW Post 5220 will gather at the Oak Lawn Veterans Memorial, where local officials will speak and veterans groups will lay wreaths. The ceremony will conclude with the playing of “Taps” and a 21-gun salute. A reception of coffee and pastries follows at the VFW Post.

Itasca’s parade starts at 9:30AM at the corner of Washington St. and Princeton Ave. The procession will work its way through the town before ending up at Usher Park, where Complete Landscaping will have food for sale. The company is donating all proceeds to the VFW.

There are several events planned in Darien for Memorial Day Weekend. On May 27 at 6:00 PM, flags will be placed at the graves of more than 1,400 veterans at Clarendon Hills Cemetery. Two memorial ceremonies will be held on May 30th. The first is set for the cemetery’s veteran’s monument at 9:00AM and another one will take place two hours later at the North Pavilion in Darien Community Park.

In Lincolnwood, the parade steps off at the corner of Pratt and Cicero Avenues at 10:20AM. After the march, there will be a bike parade to Madeleine’s Garden in Proesel Park, where a ceremony will take place.

Park Ridge’s parade begins at 10:00AM and will go from the South Park Rec Center to City Hall. Following the parade, Park Ridge Presbyterian Church is throwing a barbecue, with food by Sunrise Grill & Catering and music by Steely Dad.

In addition to the memorials and events in the suburbs listed above, you can find tributes to those who have served in our armed forces throughout Chicago.

The most prominent is the Vietnam Veterans Memorial at the Riverwalk between State St. and Wabash Ave. There, behind a fountain, the names of more than 2,900 Illinois residents killed or missing in action in Vietnam are engraved on a long slab of black granite above the words “Chicago Remembers.”

Also downtown is the Grand Army of the Republic Rotunda and Hall on the second floor of the Chicago Cultural Center. Built as a meeting space for those who fought for the Union during the Civil War, the rotunda is topped by a 40-foot wide stained-glass dome.  The hall behind it contains Civil War artifacts and marble walls with the names of 30 battles. The two rooms were closed for a year while they underwent a restoration to return them to their original beauty. It reopened in March 2022.

Those flying through Midway Airport this weekend can visit two memorials. The first is Karl Wirsum’s glass mural commemorating the Tuskegee Airmen.  Honoring the group of Black pilots who flew with distinction in World War II, the mural can be found in the Ticketing Hall at the south end. The second, located in Concourse A, honors those who fought during the Battle of Midway, for which the airport was renamed in 1949. The exhibit consists of holograms, videos and photos about the battle, a sculpture of a soldier called “America” and, most dramatically, a Douglas SBD Dauntless dive bomber, similar to those flown during the battle.

Two cemeteries on the North Side include monuments to those who were killed in action. A section of Rosehill Cemetery is devoted to the Civil War, including the Soldiers & Sailors Monument, Battery A Chicago Light Artillery Monument and a plaque dedicated to Union soldiers. There’s also a memorial in St. Boniface Cemetery honoring the soldiers of German ancestry who fought for the Union.

Chicago has two tributes to the “doughboys,” the nickname given to the infantrymen who fought in World War I.  Named for the men and women of the armed services, of the statues is by E.M. Viquesney “Spirit of the American Doughboy”. Donated in 1926 by the 132nd Infantry, the statue stood in Garfield Park but was beset by vandals before being restored and given a new location in 2003. You can find this statute Near Gate O inside Soldier Field.  Just be sure to check to make sure that access is available.

The second “doughboy” memorial can be found in Bronzeville at 3500 S. Martin Luther King Drive. Leonard Crunelle’s Victory Monument honors the African American Illinois National Guardsmen who served in France. Erected in 1927, the memorial consists of a granite shaft with three bronze relief panels signifying victory, a soldier and motherhood. There is also a list of the 137 members of the regiment who were killed in action. At the top is a sculpture of a doughboy.

Sauganash’s memorial is found at 4600 W. Peterson Ave. It lists the residents of the neighborhood who saw action in World War II, with stars next to the names of those who died in service. A smaller plaque below it recognizes the veterans of the Korean and Vietnam Wars.

Evanston has two memorials. In Fountain Square on Davis St. sits a veteran’s memorial wall listing the names of Evanston residents killed beginning with the Civil War and continuing with those lost in conflicts through the present day. Above the names is the inscription “They Gave Their Lives in War That We Might Live in Peace.” The second Evanston memorial can be found in Patriots Park, where Davis meets Sheridan Rd. Dedicated in 1930, the Evanston War Memorial has a frieze of soldiers marching with Athena, the goddess of war. At its base are the names of the Evanston residents killed during the Civil War, Spanish-American War and World War I.

We at eATLAS thank all those who have served and sacrificed in our armed forces.