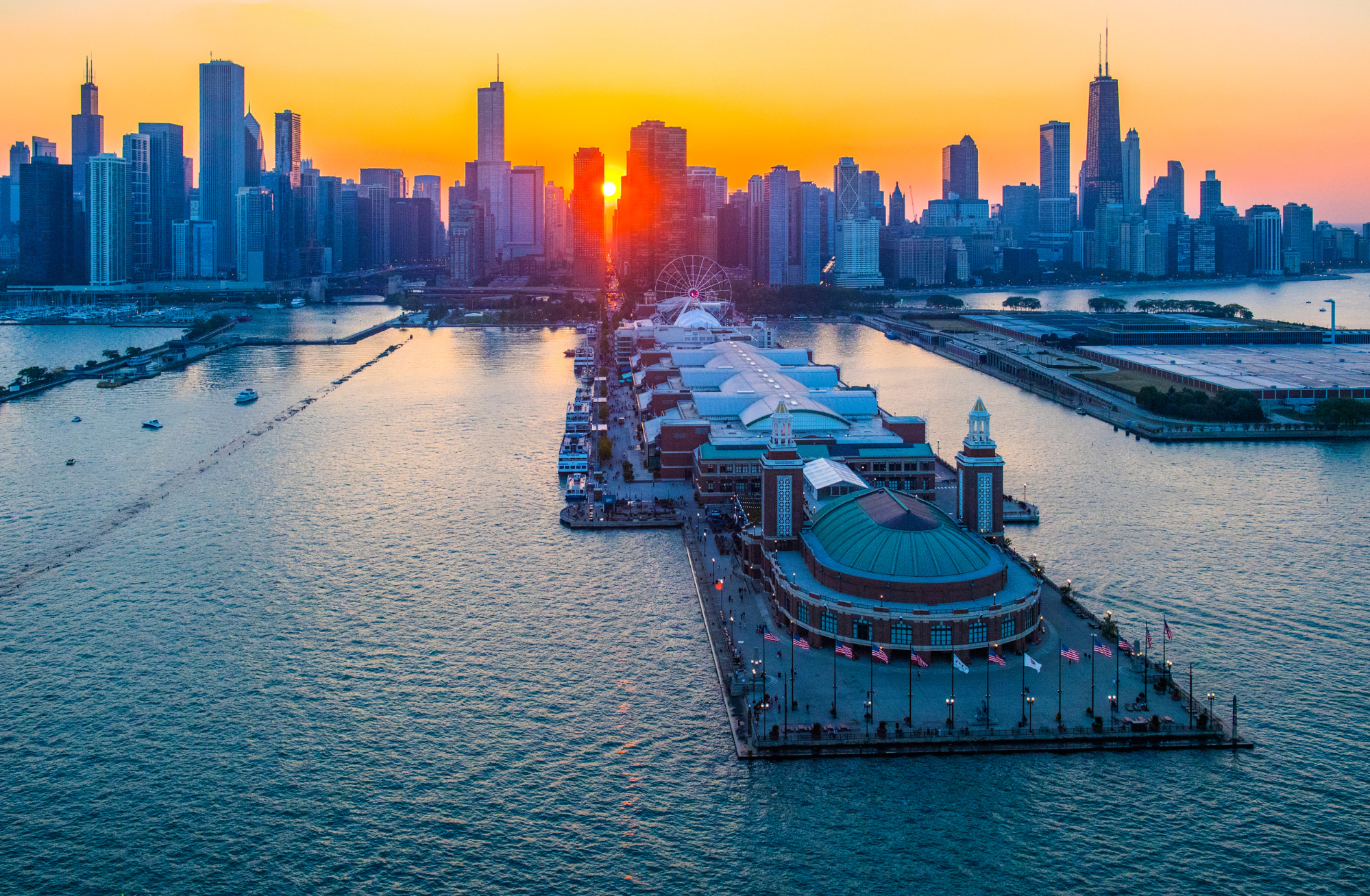 Iconic Chicago: Navy Pier – The Gate to the Big Blue

Our monthly series looks at some of the most famous locations in our city. We’ll explore the history of these places and why they have earned the love of residents and tourists alike. The latest installment of Iconic Chicago explores the history of Navy Pier.

If you haven’t been to Navy Pier in a while, it’s time to return and see how it’s grown and evolved as one of the most family-friendly destinations in Chicago. While you’re there, be sure to try one of our FREE eATLAS adventures:  The Navy Pier Mini Scavenger Hunt, or The Many Lives of Navy Pier Tour, from Tours with Mike.

Because of its status as one of the Midwest’s top tourist destinations, Navy Pier is often at best overlooked and, at worst, scoffed at by residents. But like so many Chicago landmarks, it has a fascinating history, and one that has seen it serve many purposes through good and bad times.

Navy Pier’s origin goes back to Daniel Burnham and Edward Bennett’s 1909 Plan of Chicago. Burnham recommended that a pair of long piers extending into Lake Michigan be built at Chicago Ave. and 22nd St. (now Cermak Rd.). The piers would be used for commercial and recreational purposes, freeing up the narrow Chicago River from the clutter of ships.  It also helped achieve a core tenet of Burnham’s vision: that the lakefront “by right belongs to the people” so they can “seek its restful presence at every opportunity.”

In the end, only one pier was built.  Burnham died in 1912, before his dream could be realized.   The Harbor and Subway Commission subsequently brought in architect Charles Sumner Frost. His design called for an ornate Head House with two 60,000-gallon water tanks at the entrance from the west. At the far end was the Terminal Building—which contained a restaurant, an information office, and a rooftop garden, as well as a domed ballroom. In between were two long sheds for freight and passengers going on excursions.  A trolley circled the upper level of the sheds to bring people to their gates.

Unlike other projects that added more land, the lake wasn’t filled in with debris. Instead, 20,000 logs were brought in from Oregon.  They were driven into the water and secured with steel tie-rods.  Then, concrete was poured to serve as the foundation.

On July 4, 1916, nine days before the official opening, the public got its first look at Municipal Pier No. 2, as it was then known.  A reported 50,000 people showed up. Built at a cost of $4.5 million, the 3,040-foot-long pier was yet another example of Chicago delivering what no other city had yet accomplished.

It didn’t take long for Municipal Pier No. 2 to undergo the first of its many transitions. America’s entry into World War I—just a year after it opened—caused the pier to be used as a training center and barracks for the Navy, as well as a jail for draft dodgers. In recognition of its role in the war effort, it was renamed Navy Pier in 1927.

Activity at the pier really took off during the 1920s. The Pageants of Progress, a couple of mini-World’s Fairs held in 1921 and 1922, showed off the pier’s capabilities for hosting trade shows and exhibitions. The cruise ships, ferries and excursion boats proved popular, too.

Although the trade show business thrived even during the Depression, Navy Pier suffered as a functioning port. Part of this was because of the economy overall, but it was also due to railroads replacing boats as the primary method of shipping goods. By 1940, Navy Pier had fallen into disrepair.

World War II saw the pier called into service again. It was used by the Navy to train metalsmiths, mechanics, diesel operators, while a pair of passenger steamers were retrofitted as aircraft carriers so that fighter pilots could be trained on Lake Michigan. One of the men trained was future President George H.W. Bush.

Immediately after the war, Navy Pier went through arguably its most unusual incarnation. The University of Illinois at Chicago (UIC) needed to accommodate the large number of veterans taking advantage of the GI Bill in exchange for a college education. A small section of the pier became the school’s first Chicago campus, even as it continued to host trade shows. Freighters also returned to Navy Pier in 1959 thanks to the opening of the St. Lawrence Seaway.

Just as it seemed as if the 1960s would return the pier to its glory days of the Roaring 20s, it received a triple-whammy. To start, the opening of McCormick Place in 1960 made the new convention center the preferred home for Chicago’s trade shows.  Then in 1965, UIC’s permanent campus in Little Italy was completed. And because the port’s facilities were outdated, much of the shipping business went to the piers along Lake Calumet. Once again, Navy Pier sat underused.

Temporary help arrived in 1976, when it was renovated in time for the city’s celebrations for America’s bicentennial. Landmark status soon followed, and the pier became the site of Chicagofest, a 10-day music festival modeled after Milwaukee’s Summerfest. It ran from 1978 until 1983, when a combination of politics, lack of city funds and the rise of a second festival—The Taste of Chicago—led to its demise.

By the end of the decade, the city realized it needed a long-term strategy for Navy Pier. The Metropolitan Pier and Exposition Authority was created and given $150 million to rethink and renovate the pier. Ultimately, the agency determined that the best course of action would be to focus on one of its greatest natural strengths, a place where people could gather and enjoy the summer alongside the lake. There would no longer be any attempt to have it serve as a commercial port.

Renovations began in 1992.  The first phase, a 1,500-seat outdoor pavilion called the Skyline Stage, opened in 1994. The pier fully reopened a year later, essentially as the Navy Pier we know today. It’s filled with restaurants, souvenir shops, the Chicago Children’s Museum, summer fireworks, day cruise ships, Crystal Gardens and a 150-foot Ferris wheel that paid homage to the 1893 World’s Fair. Approximately 4.5 million people visited Navy Pier in its first full year in its new incarnation, and soon became the most popular sightseeing destination in the Midwest.

As the pier approached its 100th birthday, plans were underway for another renovation. Given its success, there was no reason to mess with the formula, but it needed a few tweaks, including a greater emphasis on improving its environmental impact over the next 30 years. A new design of the promenade brought visitors closer to the lake, and people entering the pier are now welcomed by Polk Bros Park and public art installations.

Some attractions got an upgrade, too. A new Ferris wheel, 50 feet taller than the previous one, was installed in 2016; and more local restaurants opened outlets in the pavilion. The Pier has continued to evolve.  Offshore Rooftop—the country’s largest rooftop deck at 36,000 square feet—was recently added to the dining destinations.  And 2021 saw the opening of Sable at Navy Pier, a 223-room boutique hotel by Hilton.

Despite being named for its use by the Navy in World War I, there is currently no acknowledgement of Navy Pier’s role in two major wars. That could change thanks to a group looking to build a memorial at the northwestern corner of the pier. It will be made to look like the USS Wolverine, one of the makeshift aircraft carriers docked at Navy Pier during World War II.  Plans also include featuring a restored FM-2 Wildcat fighter plane and interactive displays.